A Russian Intelligence report from Nov. 2nd reveals more levels of intrigue regarding the Las Vegas shooting and subsequent assassination of remaining witnesses. NONE OF THE AMERICAN NEWS AGENCIES ARE REPORTING THESE EVENTS.

The following is from a series of articles on the deeply entangled and convoluted Deep State and its war on America:

A highly specialized thermite grenade known to used by the CIA’s paramilitary Special Activities Division (SAD) in Afghanistan was detected being ignited during the late evening hours of 16 October in the California city of Murrieta—with it thereafter being reported in the US that two Las Vegas massacre survivor-witnesses (Dennis Carver and his wife Lorraine Carver) were completely incinerated in a vehicle fire that the local firemen were unable to extinguish for nearly an hour—but whose mysterious deaths are not widely known as the massive cover-up news blackout of this worst mass shooting in America continues.

“At 09:07 GMT+3 on the morning of 17 October, SVR intelligence analysts received an urgent “red action bulletin” request from the Federal Security Service (FSB) stating that they had been notified by the Ministry of Defense (MoD) that the Luch Satellite (Olimp-K) monitoring Naval Base San Diego (the principal homeport of the American Pacific Fleet) had detected what they believed to be was a “heat launch signature” occurring at 08:43 GMT+3 in the location of 117w-33n—but that did not correspond to any known US military ordinance locations.”

Detailed analysis of this mysterious “heat launch signature” revealed that its +4,000° Fahrenheit temperature and radius calculation was a near exact match for a highly specialized thermite grenade manufactured by ALS Technologies, Inc. in Bull Shoals, Arkansas—and who produced these weapons for the US military, Special Forces and CIA…

Further analysis showed the heat signature was located about 65 miles “north of Naval Base San Diego—and that corresponded to the location of the residential California city of Murrieta—where at the time this “launch anomaly” was detected, it was 22:43 GMT-7 (10:43 P.M.) on 16 October.”

“At 22:50 GMT-7 (10:50 P.M.) local California time, the Riverside County Fire Department had been emergency dispatched to Avenida De Arboles in Murrieta where a vehicle was furiously burning” and contained the bodies of Las Vegas massacre survivor-witnesses Dennis and Lorraine Carver.

The DVR was “able to rapidly determine the use of an ALS Technologies, Inc. thermite grenade to assassinate these Las Vegas massacre survivor-witnesses… due to its “unique heat signature” having been previously identified and whose many uses are detailed in the US Navy Small Arms and Special Warfare Ammunition war manual that states “with imaginative use, the grenade can be an effective and versatile demolition tool and can destroy oil drums, shipping containers and metal ammunition boxes”—but that CIA Special Activities Division forces now flooding into Afghanistan, also, use to destroy Taliban vehicles.”

“With four survivor-witnesses to the Las Vegas massacre, along with the mother of a slain Las Vegas police officer, and including Kymberley Suchomel who had threatened to begin her own investigation, now having all now died, this report continues, the investigation into this largest mass shooting in American history stands in sharp and absurd contrast to this weeks deadly ISIS terror attack in New York City—where, within 24 hours, everything was known about the terrorist Sayfullo Saipov—including his regularly arguing about the price of Canada Dry Ginger Ale.”

While we learned everything about this man in about a day, it has taken over a month to investigate the Vegas shooting.

The SVR analyists point out: 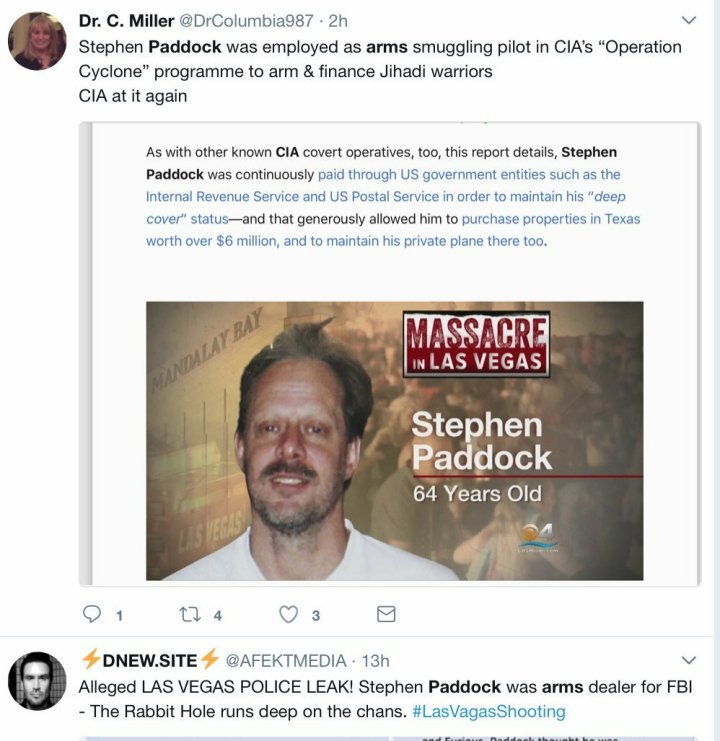 Furthermore, FBI and MSM are keeping a lid on these facts most likely because “Stephen Paddock was a (sIc) arms and human smuggler working for the CIA and Russian Mafia who money laundered his massive profits through gambling casinos…” Well, doesn’t that just seem typical. Another ploy direct from the CIA playbook is to arrest someone on trumped up charges of sexual misconduct to remove them from the public eye. This happened to Paddock’s brother, Bruce, who guarded his weapon stashes. (Remember weapons inspector Scott Ritter, who after truthfully stating that Iraq had no weapons of mass destruction, was quickly arrested and convicted of child sex charges?)

“This report concludes by noting that the Las Vegas massacre has now disappeared entirely from the news cycles in the US, too—with the only exception being the popular Fox News host Tucker Carlson, who attempted to find out last week why the critical witness Jose Campos was allowed to leave the country, but in asking this question was hung up on by police authorities and has not reported on it since, thus ending all mainstream media coverage of the worst mass shooting in American history—but whose alternative news adversaries are not giving up in their continuing to report about what really occurred.”

NOTE: I have been working hard to bring you these facts, and doing my best to coalesce them into an understandable whole. I’ve been having difficulty bringing the embedded links over from my word processing app. Without getting further behind, I ask your indulgence so I can get these articles to you, and I will update the links and info as soon as I can. Thank you.

You can ignore reality, but you cannot ignore the consequences of ignoring reality - Ayn Rand

The stories of my slow path to awakening.

THE NARROW GATE
Greg Anthony's Inside The Investigative Journal

How & Why I Took the Vatican and Jesuits Head On

Beyond the Smoke & Mirrors

Voices of the American Intelligence Media

Lift up your heads; redemption draweth nigh.